A FAB four from Harry Kane took his Premier League tally to 26 goals, two ahead of former leader Romelu Lukaku and one more than he clocked up last season, as the Tottenham idol closes in on a second successive Golden Boot.

Spurs’ visit to Leicester, with little at stake, might easily have turned into something of a damp squib. Damp; yes. Squib; no. Fireworks all the way!

Not least from England international Kane who was as unstoppable as the rain that drenched the King Power where Spurs racked up an impressive 6-1 win.

After the emotion of the farewell party and victory at the Lane on Sunday, and given that second place was already guaranteed, you couldn’t have blamed Spurs for taking their feet off the gas.

Not a chance. Certainly not when you have got goal machine Kane in your ranks, hunting down another precious personal prize.

And not when you’ve got Son-Heung min in explosive, goalscoring form too. He joined in the goal fest with a decent brace that could have been a fab four also after some early misses. 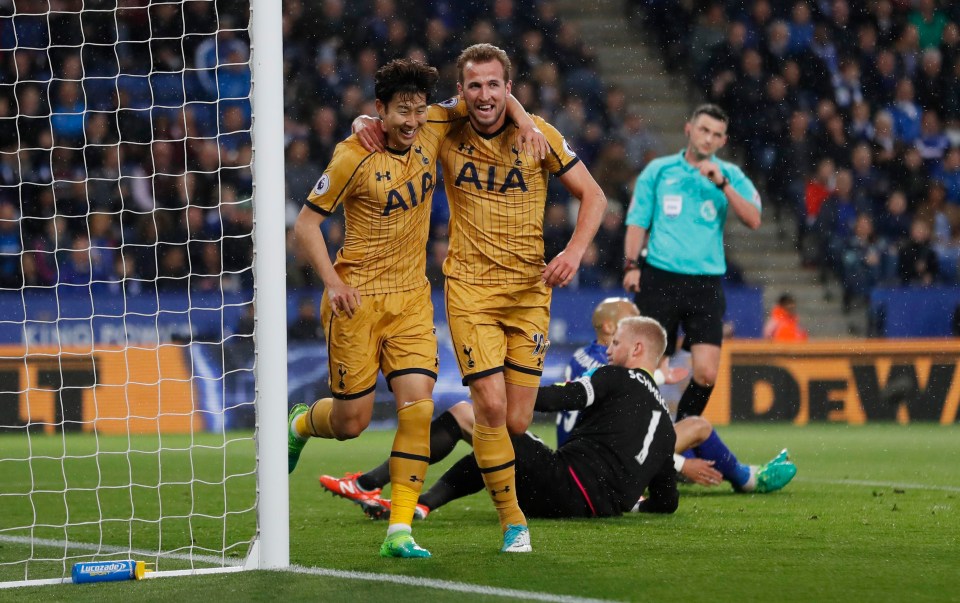 That’s 14 for the season for the attacking midfielder who, together with killer Kane, embarrassed Leicester on a night the Foxes will want to forget.

It certainly wasn’t the result interim boss Craig Shakespeare wanted or needed at a time when he is looking to press home his claims for the manager’s job full time.

Apart from Ben Chilwell’s cool strike on the half hour mark – to make the score 1-2 – Leicester were never at the races. No match for the second best team in the country.

This was Spurs at their imperious best and Kane was a man on a mission. All four goals were brilliantly and clinically taken – and he’ll fancy a few more against relegated Hull on Sunday.

The Golden Boot is surely his now as it’s hard to see Lukaku scoring a hat-trick against Arsenal in Everton’s last game of the season at the weekend.

By his own admission, scoring four was beyond his wildest dreams – he said he would have been happy to ‘score one or two’ to take the race to become top scorer into the last game.

No need to worry now Harry, your name is on the famous boot…again!