A Moment of madness by Jonjo Shelvey cost Newcastle dear on their return to the Premier League – and he should be stripped of the captain’s armband immediately.

His ridiculous, ludicrous, blatant stamp on Dele Alli earned him the third yellow card of his career. Deservedly so.

It’s not the first time Shelvey has crossed the line, but we thought he had learned his lesson. Clearly not.

There is no doubting his footballing talent – and ability to dictate a game with his range of passing – but the petulance of youth has not abated.

He’s got to grow up – and fast. He’s not a kid anymore. He’s 25 for heaven’s sake and been around long enough to understand the need to act more responsibly.

Especially when you have been made captain of a big club like Newcastle. Any club, in fact.

We know that Tottenham’s cocky midfielder Alli has the capacity to wind opponents up. And Shelvey fell for it.

As skipper you wear the armband for a reason. Several, in fact. You are there to lead by example and act responsibly. Show that you are a team player. 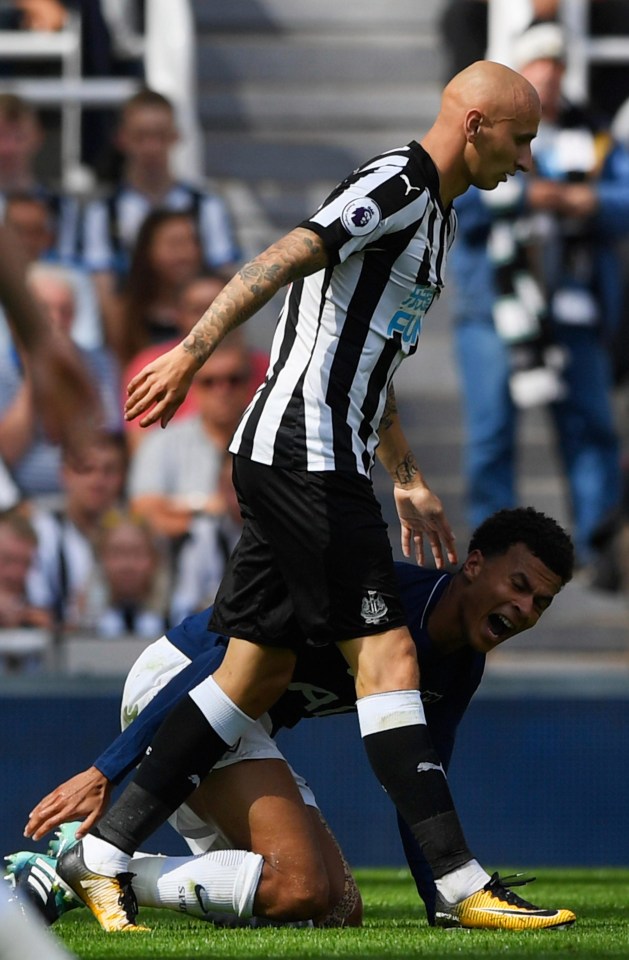 Shelvey did neither with his abhorrent act of needless aggression. He’ll get a three-match ban and we hope Rafa Benitez exacts further punishment.

Ironically, and perhaps fittingly, it was victim Alli who later opened the scoring for Spurs. Even though Newcastle fans made him out to be the villain of the peace.

To rub further salt into Newcastle wounds – and add to Shelvey’s embarrassment – Ben Davies extended Tottenham’s lead. And there was no way back for the men in black and white.

Shelvey has to shoulder responsibility for this defeat because his dismissal proved to be the turning point in a game Newcastle may well have gone on to win with 11 men on the field.

In the end, Spurs ran out comfortable winners to under-pin their title credentials. Victory could have  been more emphatic if Harry Kane had converted a couple of decent chances.

But, he’s always been a slow starter. More to come, of course, from one of the best strikers in the Premier League…and beyond.