THE ‘Last Day at the Lane’ will be an emotional occasion for Spurs fans and players, past and present. No-one more so than the club’s ultimate ‘fan’ who went on to become arguably their greatest ever player and also the club’s manager – Glenn Hoddle.

Voted Spurs Greatest Ever Legend in a poll of players, fans, journalists, pundits and celebrity fans in the book ‘Down Memory Lane’, Hoddle goes through his own memories of the Lane on the eve of the final Premier League game with Manchester United this afternoon.

In part two of this Hoddle exclusive for zapsportz.com Hoddle relives memories of his greatest goals and games at the Lane, and there were plenty…but none better or more fitting given their weekend opponents than his stunner against United.

MY BEST GOAL AT THE LANE

I’ve enjoyed many goals at the Lane in my time there, but my favourite has to be the one in the League Cup against Manchester United. That was very special. It started with a Terry Yorath free kick and a lovely one-two with Ossie but it did come at me a little high but I managed a scissor kick that flew past Gary Bailey in the Manchester United goal.

I did score a similar goal against Nottingham Forest when the ball never touched the ground but the one against Untied edges it for me.

MY FAVOURITE GOAL AT THE LANE 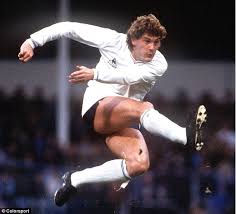 Of course, one goal will always stand out in my memory, and that was my last goal, in my last game at the Lane.  It was against Oxford when I picked the ball up in our own half and went right through their defence and rounded the keeper, before blowing a big kiss to the crowd.

If I’d written a book about all my years at the Lane, then that is how I would have finished the final chapter with a goal like that and a feeling like that, as playing at the Lane and for Spurs meant so much to me.

MY FAVOURITE PERFORMANCE AT THE LANE My favourite performance at the Lane has to be against Feyenoord in a European tie.  There is something quite magical, special about European nights under the lights at the Lane.  It was always a great atmosphere, but there was something about the team wearing all white as they did in those days that created that special something under the lights.

That special something I experienced as a fan myself as I supported the club as kid growing up in Harlow.  My favourite game was the time I faced Johan Cruyff, one of my great heroes as a kid, in a European tie when he had said before the game that he intended to mark me out of the game. didn’t quite go according to plan for the Dutch Master (as the above pic shows).

We faced a Feyenoord team in the UEFA Cup packed full of players from the World Cup. We won 4-2 and I created all four goals in the first 25 minutes.  I felt that was my best-ever personal performance at the Lane, and was a very special one for me, particularly as Cruyff came into the dressing room afterwards to shake my hand and say ‘well done’. Now that was a very, special, special moment.

MY BEST LANE MEMORY AS A FAN

One of my best memories as a fan was watching the UEFA Cup Final second leg at the Lane in 1972, when Martin Chivers scored two wonderful goals at Molineux, but Wolves went one up in the second leg, until Alan Mullery’s diving header at the Park Lane end and the place went nuts as Spurs won the trophy with that winning goal.